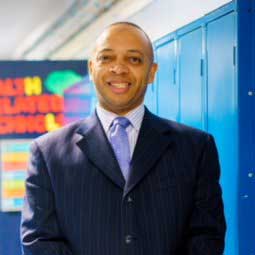 Overseeing a turnaround of high-poverty Paul Robeson High School after it was spared from closure four years ago. The school last year produced a 98% graduation rate, with over 50% going on to college.

The school now reportedly has five applications for each of its freshman class’ 75 seats.

Four years ago, Paul Robeson High School in Philadelphia was slated for closure. Spared at the 11th hour, however, it was placed under the oversight of Richard M. Gordon IV, whose work at the now-closed Vaux High caught the district's eye. The high-poverty school now has around 300 students enrolled, and it has been recognized as the city's most-improved high school, with a 98% graduation rate and over 50% of graduates going on to college.

For Gordon, it's all about relationships.

"I like to think that I have such a great relationship with my students that it's very rare that I can ask a student for something, or to do something, and they tell me no," Gordon told Education Dive during a recent visit to Robeson. "They just don't. It just doesn't really happen that way. And it's because of established relationships."

Following Gordon through the halls of the school reinforces those words. The students are all positive and cheerful, happily greeting him and sharing their accomplishments. Even when he catches a student loitering in the halls, the exchange is respectful. He also tells us that he has an open-door policy in his office, with students welcome to stop by and chat or just grab a snack. And many students even have his personal cell phone number.

"I really want to come and actually try and see what I can actually do to try and impact the lives of our students that are happening here. Because, at the end of the day, our students who we serve here in Philadelphia are really — they're me," said Gordon, who grew up with a father who "wasn't always on the right side of the law" and a mother who raised three sons as a hairdresser in Philadelphia.

Turning around Robeson hasn't been a cakewalk, though. Empowering students to believe in themselves and their ability to succeed and see themselves as equal to everyone else in the city has been a persistent struggle, he says.

As for the Dive Award? Gordon says he couldn't have achieved the success he has without the support of his staff and the hard work put in by his students and their families. "It was a very scary time the first couple of years, because the belief was that we were going to close again within the first couple of years," said Gordon. "This award really just kind of highlights all the hard work that my students really have put in. It's really been all them, and all of our parents. They have really put in work."

For more on Principal Gordon, check out our full conversation here.

Given his successes at Paul Robeson High School, Gordon is sure to remain a rising star to keep an eye on and an invaluable asset to Philadelphia’s public school system. His focus on building relationships and a sense of community within his school building should be a key takeaway for schools of any size, regardless of location.